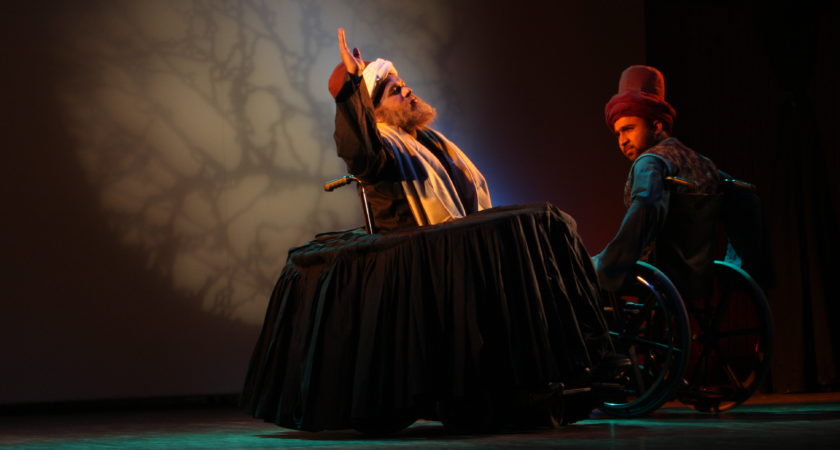 Shantha Serbjeet Singh writes No day goes by without someone or the other, from some agency or the other, public or private, friend, acquaintance or then again just someone who has weaseled my contact out of some unsuspecting friend, calls to pick one’s brains about random things, from the artists they should choose for a performance, a festival, a special event or sometimes for just phone contacts of others! And of course, this is always gratis! Of course! But one recent recommendation I made, at the request of a team preparing a special film on Delhi for the Commonwealth Games, was of ‘Rumi on Wheels’ directed and choreographed by Syed Sallauddin Pasha.

Syed Sallauddin Pasha is the man who has coined the phrase “ability unlimited” for his amazing troupe of persons with disability. The foreign team got back to me with a special note of gratitude for putting them on to Pasha’s work. They said they had never been so inspired by a dance work.

A little introduction to Guru Pasha’s work. They are many, from his major productions like ‘Ramayana’ and ‘Bharatanatyam on Wheels’ to the one on Sufi Dance and the life story of Rumi and Shamsuddin Tabrizi, all on wheel chairs and crutches. Rumi said: Duyi az khud badar kardam, yaki deedam do alam ra, yaki joyam, yaki danam, yaki beenam, yaki khanam. That means: I have banished duality from my mind. I see the world as One. I know One, I desire One. I seek One. When Rumi asks Shams, his disciple: And where is the ladder on which I may climb to heaven? Shams replies: It’s love. Learn to love. Earthly loves are a mere shadow of Divine Love. Seek the love that cannot be caged by word, he sets the stage for giving the world the deep meaning of Sufi philosophy.

Shams taught Rumi absolute love for the Divine. God is the beloved, the devotee the lover. It is Gohar Khatun, Rumi’s wife who, as an ordinary housewife, lays no claim to scholarship or mysticism, who gives us an abject lesson in the unconditional, self – sacrificing love that Shams taught Rumi. Finally, all that matters is love.

The play written by Urdu, Persian and Punjabi writer Amrit Kent, is about the astonishing story of the encounter between Mevlana Rumi and the wandering mystic Shamsuddin Tabrizi that occurred in 13th century at Turkey, in Konya. Jalaluddin Rumi was a respected religious scholar and family man who had inherited his father Bahaldin’s madrassa. Despite being a confidante of the ruler and beloved of the people, he was not at peace. Nagged by a feeling of dissatisfaction, he had an intuition that there was more to religious life than his intellectual knowledge of the spiritual path. Shams came to Konya in search of Rumi. His quest was for a man who was worthy to receive the esoteric inner knowledge that he, Shams, was bound to pass on before he died. All mystical paths require a pir or teacher to guide the adept on the right path. ‘Rumi on Wheels’ points out that yearning can be buried in a person who may not be entirely aware of it and awaits the touch of a barakah or Divine Grace in the form of a guru.