Syed Sallauddin Pasha is internationally recognized for his pioneering dance therapy and innovative wheelchair dances for persons with special needs. His three decades of work has created social-cultural equality, dignity, inclusion and empowerment in art and culture for the differently abled. 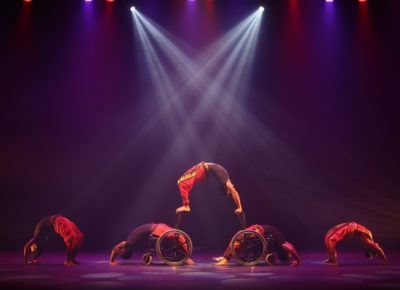 Pasha Innovated Yoga On Wheelchairs three decades ago. 5,000-year-old ancient Indian yoga asanas/postures are mastered and performed professionally on the wheelchairs by specially-abled people. When Sallauddin Pasha’s wheelchairs disciples begin to perform miraculous Yogic postures they transform themselves into divine energy and… 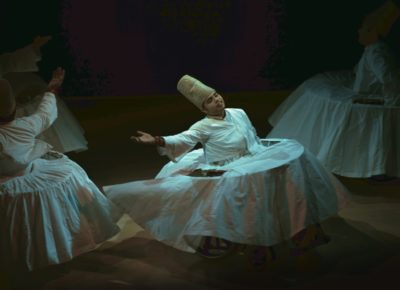 When the dancers on wheelchairs perform the Sufi dance, they immerse deep into Sufi mysticism that leaves no room for prejudice. It is above all religion, race, caste or creed. It is sheer Advaitism (absolute oneness, one without a second, non-duality) in… 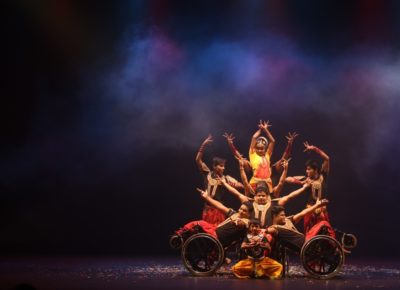 This is the time to arise and awake and see to believe – an innovation and revolution in the history of classical dances of India. Performing Bharatanatyam on wheelchairs and use of wheels in place of legs have taken years and hours… 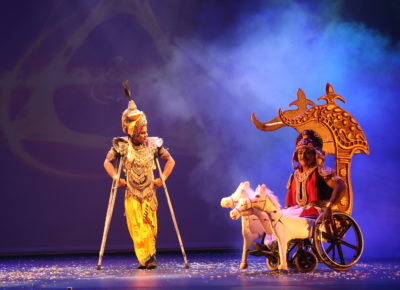 First of its kind in the World The Bhagavad- Gita (Song of God), the famous conversation between the warrior Arjuna and the supreme being Krishna- posing as Arjuna’s Charioteer- at the onset of the battle of Kurukshetra comes alive on Wheelchairs with… 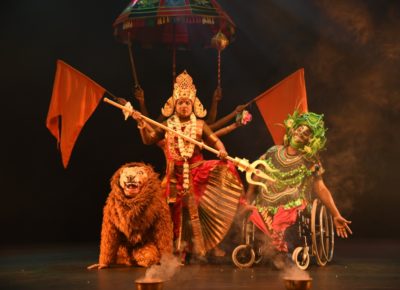 Traditional Mask Dance Drama On Wheelchairs – First of its kind in the World In another first, differently abled dancers tell the fabulous story of DURGA using the delicately nuanced masked dance form of Purulia Chhau. Durga is an incarnation of Devi… 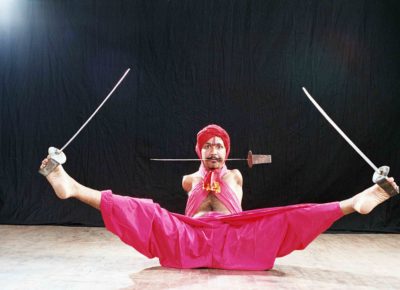 Syed Sallauddin Pasha is a great visionary and creator. He has received International recognition and awards for his pioneering therapeutic wheelchair dance theatre productions for persons with special needs. More than three decades he has innovated and choreographed more than 100 wheelchair dance therapy productions promoting equality of opportunity, equal platform,  and inclusion of people with disabilities.

Syed Sallauddin Pasha, born in 1968, hails from a family of healers from Anekal, Karnataka, India.  As a child, he enacted lead roles in Kannada and Sanskrit plays and Studied Carnatic music from TS Ramamani. He studied Bharatanatyam under late K. P. Kittappa Pillai, Narmada and Padmini Rao and Kathak under late Maya Rao.

He graduated as a Choreographer from Natya Institute of Kathak and Choreography, Bangalore University and has worked with Theater and Film personalities of the country like B.V. Karanth, M.S. Sathyu of Garm Hava fame and Renuka Sharma, actors Vishnuvardhan and Ramesh Aravind. Ability Unlimited is the brainchild of Pasha, dedicated to persons with disabilities.

Pasha has promoted dance and movement therapy for people with special needs. He directed Europe’s biggest therapeutic theatre project Ramayana on Wheels with 108 Finnish special children and adults, in collaboration with Espoo, which was performed at International Theater Festival. He has also conducted therapeutic workshops for tsunami victims. He has also orchestrated Durga and Martial Arts on Wheels with 200 differently-abled children and adults. His dance productions include Bharatanatyam on wheelchairs, Sufi dance on wheelchairs, Yoga on wheelchairs, Bhagawad Gita on wheelchairs, Ramayana On wheels, Rumi On Wheels, Chariots of the Gods, wheelchair on wings.

Pasha has presented his dance performances at Rashtrapati Bhavan for the President of India Pranab Mukherjee. His Miracle On Wheels shows for the United Nation Information Centre and Indian Council for UN Relations on 2 May 2015 at FICCIauditorium, New Delhi on the anniversary of Convention on the Rights of Persons with Disabilities.

Pasha presented his Miracle on wheel performance for Taj Mahotsav in February 2015. He has also presented Kathak Dance Performance in conjunction with the exhibition of “Islamic Art of India” on the occasion of the exhibition launching in March, 2002 at the Islamic Arts Museum Malaysia, officiated by the Prime Minister of Malaysia, Mahathir Mohamad and for the special performance graced by His Majesty Sirajuddin of Perlis, King of Malaysia.

WORK IN FILM AND TELEVISION

Pasha choreographed Chande Pe Dance song for a special episode on the Persons with disabilities in the first season of Aamir Khan‘s TV series Satyamev Jayate. He has acted as Saint Shishunala Sharif in Kannada teleserial, Eshwaran Alla Nine Yalla directed by Renuka Sharma. He acted in the Kannada Film Parva with late Kannada superstar Dr.Vishnuvardhan. He danced for M.S. Sathyu‘s Doordarshan serial Kayar in 1992.

Syed Sallauddin Pasha’s Dancing wheels is the most creative and unique initiative in the world of Indian performing arts.

Syed Sallauddin Pasha’s Dance on Wheelchairs in India by differently abled artistes on Wheelchairs & Crutches is mesmerising, empowering and captivating the audience, thus creating awareness about their potential and skills with their ability unlimited. Unbelievably the abilities of these artists with disabilities are amazing – they are accomplished to portray the most difficult scenes through their spectacular dance performances in inspiring the masses.

Each of  Pasha’s innovative performances Wheelchairs and Crutches are converted into different props according to the dance themes like Chariot, Sufi, bows-arrows, swords, chakras, horses etc.

Wheelchair dance in India has gained tremendous popularity all over the world due to its unique style of dancing on wheelchairs and crutches. Pasha has trained his students professionally in Classical, Contemporary, Modern, Folk, Martial Arts and Yoga for more than a decade. His performing unit has travelled widely and featured in prestigious National and International dance festivals and Televisions Shows with the message of dignity, equality, inclusion and accessibility.

Classical Wheelchair Dance Techniques Innovated by Syed Sallauddin Pasha is first of its kind in the world. Pasha spent several years sitting on the wheelchair to create unique classical wheelchair dance technique that can be performed professionally by differently-abled people. Pasha’s Wheelchair…

Syed Sallauddin Pasha is internationally recognized  as a pioneer in Indian Dance Movement Therapy. He is also considered as the father of Indian Therapeutic theatre for innovating Therapeutic Theatre Productions for persons with multiple disabilities. He has successfully conducted several dance therapy… 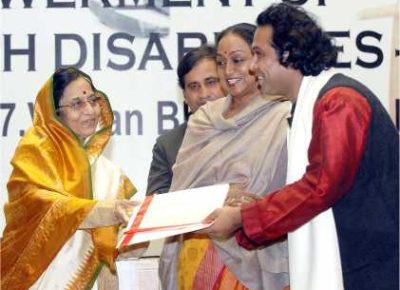 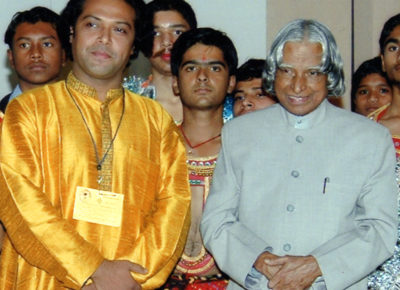 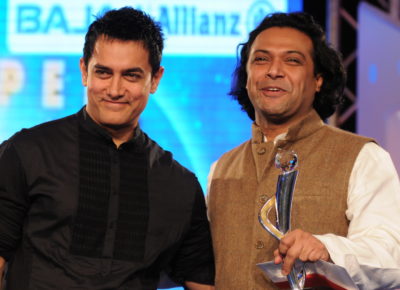 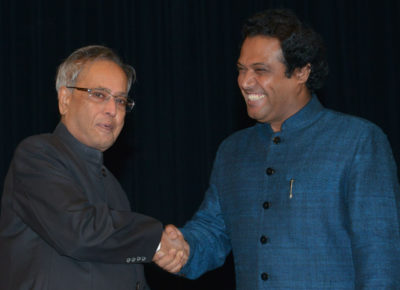 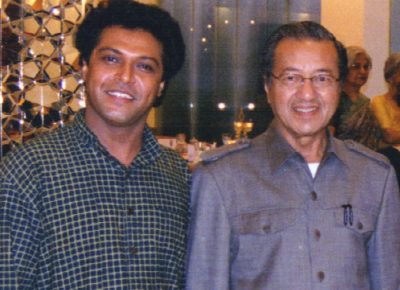 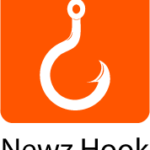 Miracle on Wheels is transforming the lives of thousands of wheelchair users in India. 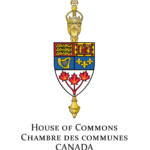 Your tireless effort and commitment exemplify the very best of the Canadian spirit. May your dedication and service be an inspiration to those around you to give back to the community

“Miracle on Wheels“ is an experience beyond the ordinary. The spinning speed of the wheelchairs is faster than an accomplished ballet dancer’s spins. disabled people international, CANADA 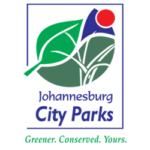 The powerful performance and the collaboration with local performers from the differently abled community, has left a legacy of unity, empowerment and inspiration.

“Miracle on Wheels“ is an experience beyond the ordinary. The spinning speed of the wheelchairs is faster than an accomplished ballet dancer’s spins. disabled people international, CANADA 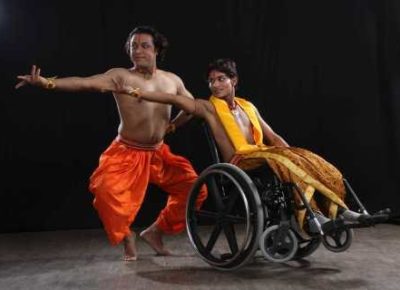 Prime Minister Narendra Modi declared a three-week nationwide lock down starting midnight Tuesday 24 March 2020 for 21 Days. Really it is difficult to stay at home for 21 days without any activities. Syed Sallauddin Pasha has decided to give online Wheelchair…

After a houseful successful show on a innovative dancing wheels by Syed Sallauddin Pasha for scientists all over India at IIT Madras we had an interactive with Professor Sujatha Srinivasan, Department of mechanical engineering, IIT Madras who also is the head of R2D2. It…

Karmaveer Maharatna Award. I sincerely want to thank the Almighty and my wife Mahiraa Jaan Pasha for being with me at all times both good and bad. Last evening (26/11/19) I was bestowed with the REX Karmaveer Puraskaar Maharatna Award instituted by… 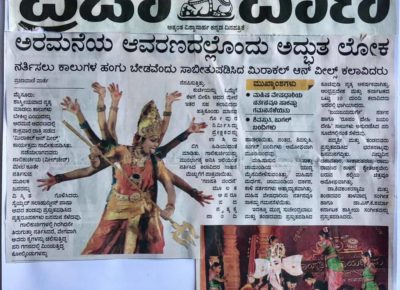 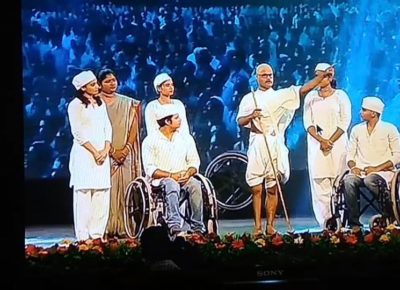 The Journey of Mahatma Gandhi 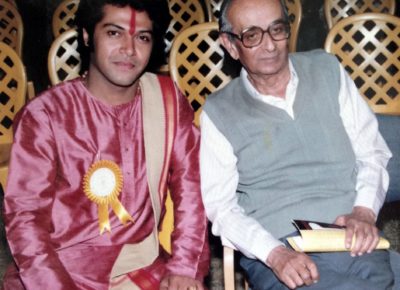 Remembering great friend and guide Shri B.V.K. Shastry, Noble Man, Great writer, music and dance critic.Three decades ago… When one of the Guru’s said they don’t want to teach me ‘Navasandhi Nruthy – Temple Dance’ because I am Muslim, I was very… 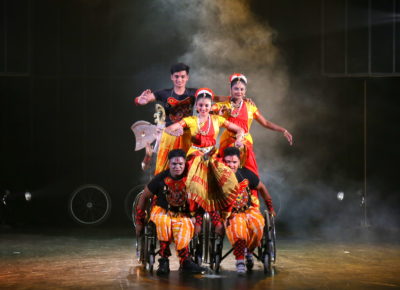 Dancing for a cause – Syed Sallauddin Pasha

The first of its kind Bharatnatyam on wheelchairs’, an Indian classical dance ballet innovated and choreographed by national and international award-winner, Guru Syed Sallauddin Pasha works is becoming worldwide recognised and everyone across the world wants to learn this incredible art of… 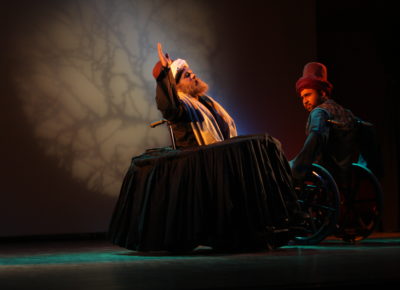 Shantha Serbjeet Singh writes No day goes by without someone or the other, from some agency or the other, public or private, friend, acquaintance or then again just someone who has weaseled my contact out of some unsuspecting friend, calls to pick… 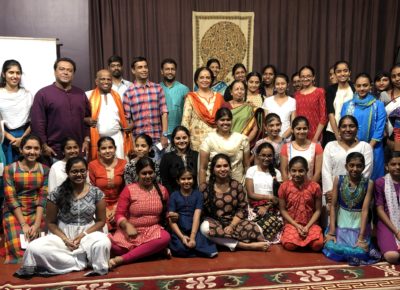 The audience at  Kalasindhu Dance Studio in Banashankari on Saturday (3.8.2019) experienced a great carnival of Mysore style of Bharatanatyam by Kalashri’s  D. Keshava.  His Lecture demonstration was filled with renowned dancers, scholars and filmmakers such as Poorinima Gururaja,  Mala Shashikant,  Padmini Shreedhar, Sheshadri…